Talk about a blast from the past, this topic first started in 2008! Interesting to hear your still cracking on with your megawad despite the slow pace, better late then never!
Top

Hi there - lots of time has passed but I made some progress on the megawad.

I had to redo some of the maps(currently at Map20) and I will have to release the megawad in Episodes as it would take too long to have a final "product".

Regarding the ChocolorDoom sourceport - I have been contacted by a member of the DoomWiki that wants to add it to formerly mentioned but I have put this on halt till summer. There's quite a few things to be taken care before "releasing" this literal hack.

I have written a sort of development diary regarding the megawad which I'll copy here.
Top

I will stray from Map10 and move on to Map20 for the time being.
Albeit I like it, it will have to be remade.

It does not fit the style of the megawad anymore. I'll add the map, maybe with some other prototypes, to a proto.wad for amusement.


- section not directly map- but (Doom) mapping related -> introspection ahead -

Map20
is mainly based on the sewer theme with some cavernous style blended it. I guess the map is a kind of externalisation of the impression that DoomII's Map02 had on me. I would rate the original Map02 as one of my alltime favorites... back in 1995 it simply blew me away. And it was so eerie and creepy that I used to shit my pants when crusing those dark halls on my cherished Vobis 15" CRT.

The design of "Underhalls" is extremely elegant and interesting. McGee's evasion of the support texture and instead using geometry(a U with right angles) to mask the blending of different textures(pipewal2 & stone4) is, to me, as clever as it is simple.

McGee's maping paradigm really differs from Romero's and that's why he was/is one of the really good mappers for Doom - his material has substance. One could say McGee was one of the first, if not the first, mapper that featured structure within structure without unnecessary clutter(especially Map02/Map03/Map04).

What I mean by that is that he was able to build detail that gave an impression of purpose but was abstract and did not meander in inane detail(some of this quality can also be vaguely found in for example E2M7).

"Detail" was one of the most abused features in nearly all user made maps - instead of giving rooms a functional or visual "watermark" mappers often used to employ the "sector within sector and differ height by 8" technique to create some sort of self proliferating monstrosities. This was one of the reasons why,even early on, I preferred the primitive user maps which were simple squares tied together. The more "physicality" you bring into a map, the harder it gets to make it into a cohesive world - this difficulty seems to grow exponentially. Thus I often go back to maps of the megawad and shave of unneeded and tacky structure to make room for architectire that can breath. It's often hilarious what bullshit I incorporated instead of cleanly carving out the world. It's of course hard to get it right and one has to be somewhat pragmatic or no finished map may emerge in one's lifetime.

...his work is also one of the reasons why DoomII feels, in parts, different and geometrically better structured than DoomI(excluding Episode01 and a few other maps). For example, wander "The Focus" via "-nomonsters -warp 02", and let this interesting small world sink in. Now leave and start up Doombuilder, load said Map and take a long hard look at the map - it's so simple but when you are inside the map it feels intricate and detailed. That's what really impresses me regarding the original maps - the concise and minimalistic approach that yielded some iconic stock levels.

Above said does not negate or diminish more random, sprawling or chaotic maps as bad - on the contrary such maps are one of the soul essentials of the Doom experience BUT the chance is smaller to hit gold than with a more simplistic and "Focus"'d approach unless you're as talented as Tom Hall. 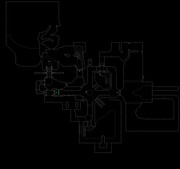 Got a little bit of work in on Map25 - it has currently some weird bio lab touch, albeit I think I have to redo some of the design to capitalize on it.
I often see potential in themes only to let it slip in favor of an easy, or more standard, route of design. Of course there's also limits on textures and geometry which are sometimes a bit of a blocker.
There's something about this section that de-light-s me. It reeks of Monster Condo due to the brick / lamp textures, but there's some other quality that I can embrace. Most of the map is not in that style so I may have to, as already stated, redo some sections.

Is there a specific source port you're aiming for? A lot of the screenshots posted kinda remind me of Chocolate Doom but the latest one doesn't look like it was taken in Chocolate Doom at all.