From the workshop of Kevin Kilstrom

Discussion about Blood and its addons.
Post Reply
55 posts

From the workshop of Kevin Kilstrom

All right, let's see a glimpse from Blood's development then. I advise visiting the Posty cooking thread first to supply yourselfs with the proper snacks.
We're going to dive into deep blood so a diving suit is recommended as well. Oh... and beast vision too... etc.

Please treat the followings with respect!

First, Kevin tells how he made the models. It all happened 12 years ago... 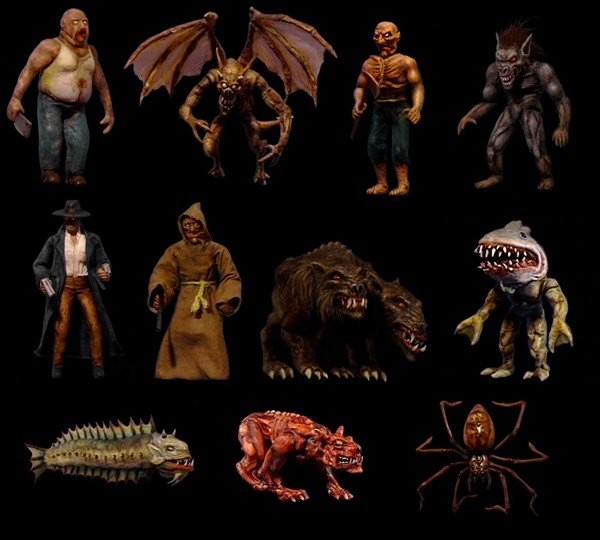 "Unfortunately, digital cameras weren't invented when I took these shots so the pictures are not that great. I digitized all the models in my office. I had a sweet setup with a small blue screen and video camera. That's how we did most of the weapons too as well as the disembodied hand (I just used my own hand for that)."

The main inspiration for the Caleb model was Ash from Evil Dead2 (plus the hat and trenchcoat). 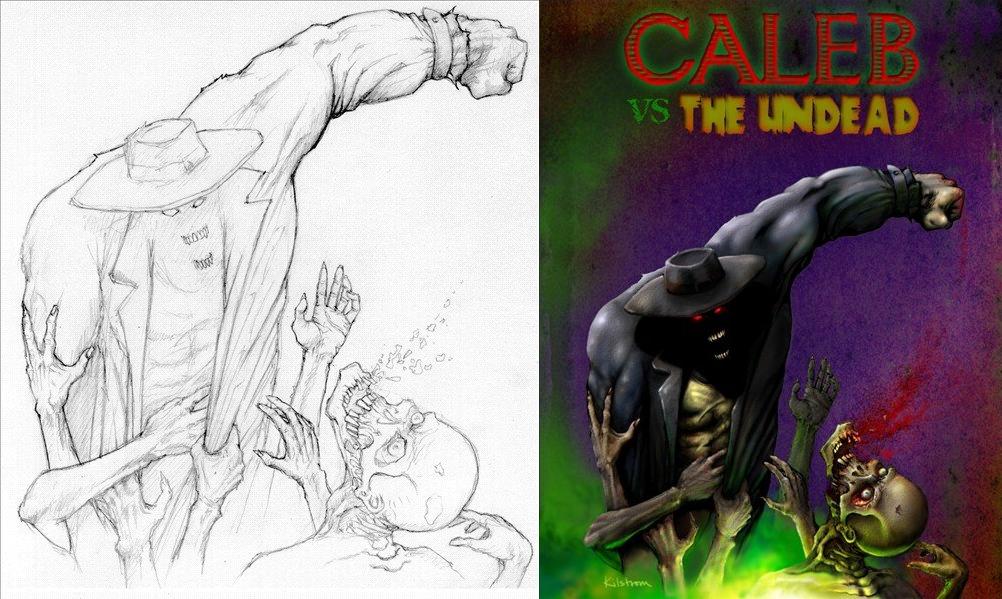 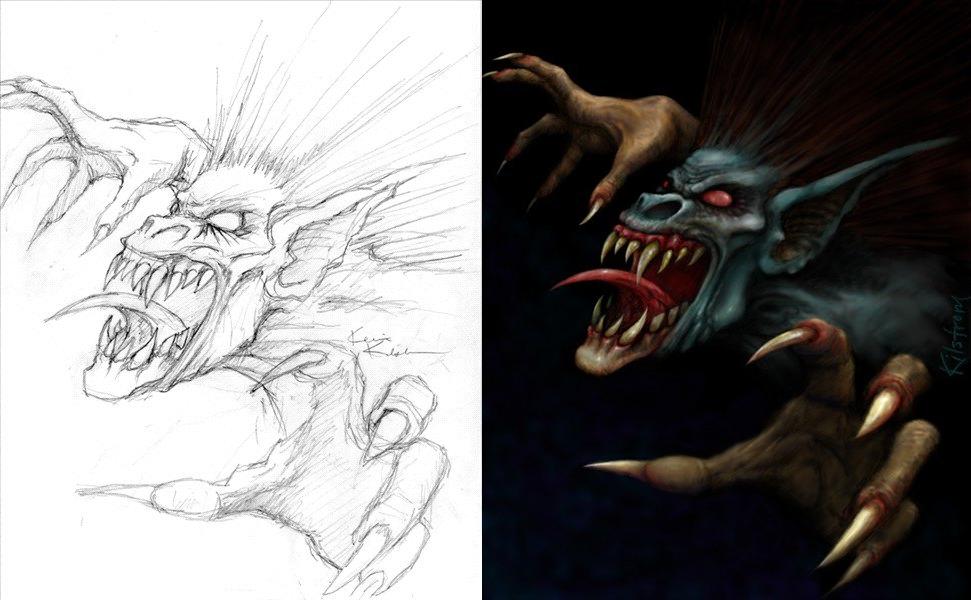 "I don't remember what the inspiration for Tchernobog was. I think Nick and I just talked about it and decided that he would be a decaying demon so I just did a couple sketches and went from there." 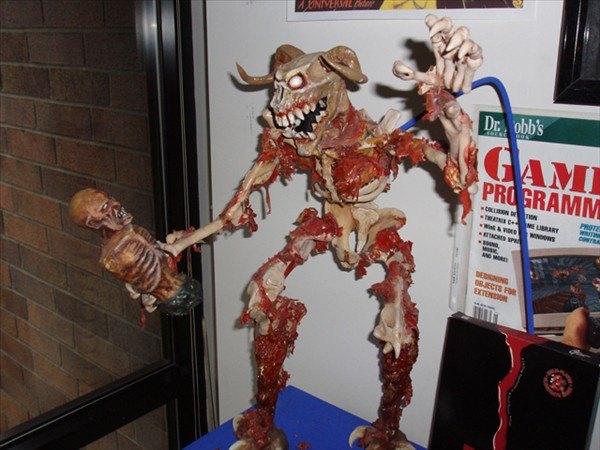 And this is how Caleb were born... sort of: 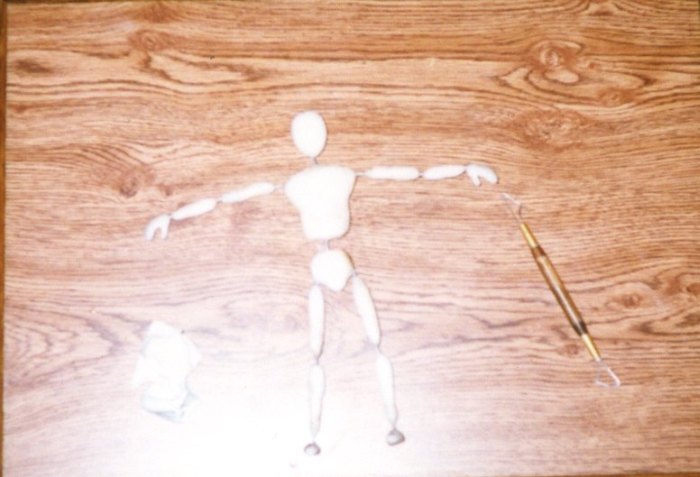 "This is the internal skeleton that I made for Caleb. It's a pretty simple setup with just wire for the joints. I would have loved to have machined some ball and socket joints but I didn't have the tools or the money for that back then. The bulky body segments were made with this stuff called Friendly Plastic." 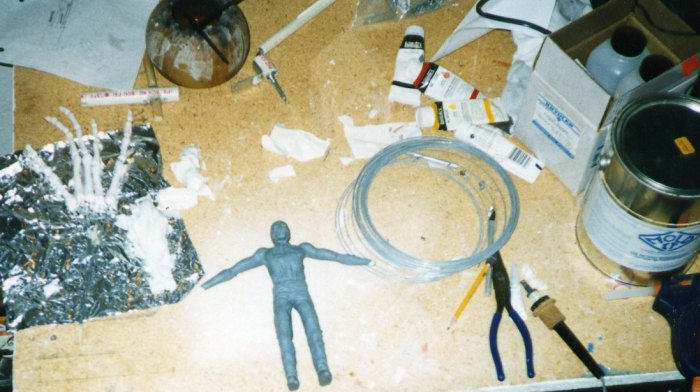 "This is the clay version of Caleb. I used a pretty hard oil based clay for this part so that I could make the whole thing in one piece. I then made a two piece plaster mold from the clay sculpture so I could cast him with liquid latex and foam latex." 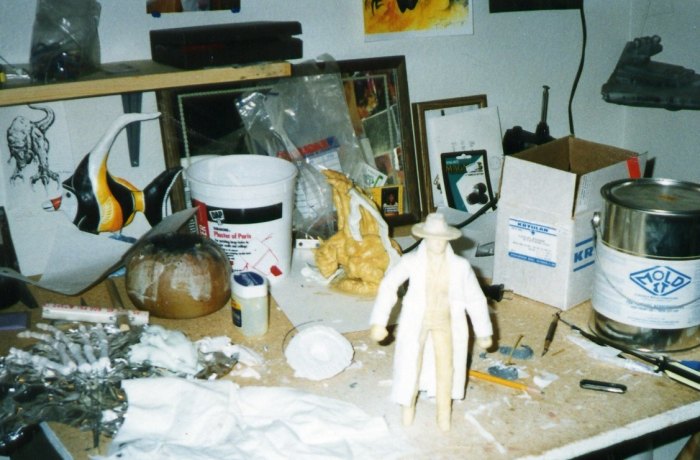 "Here's a shot of Caleb before he was painted. When I cast the figures I would brush in liquid latex inside the two halves of the mold to form a nice skin that would pick up all the detail as well as make the model easy to paint. Then I would set the skeleton into one of the halves, pour in some expanding foam latex and then quickly stick the two halves together. Once the foam latex was cured, I would carefully remove the mold and fix up the seams. Caleb's hat was cast seperately with liquid latex but his trenchcoat was made with fabric that had wires glued on the inside lengthwise to allow me to pose it." 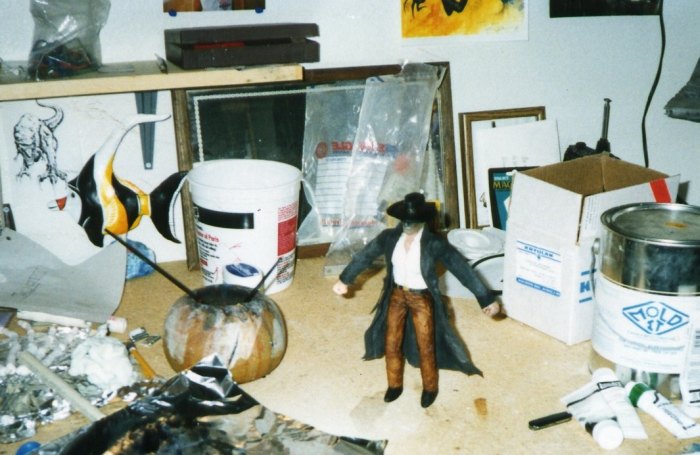 "Here's a pic of him painted. His face doesn't actually have much detail at all because once he was digitized into the computer and shrunk down, you wouldn't be able to see any detail anyway. Also, I painted the top half of his face black so that it would always be in the shadow of his hat."

Here are some various pics of some of the other models from the game: 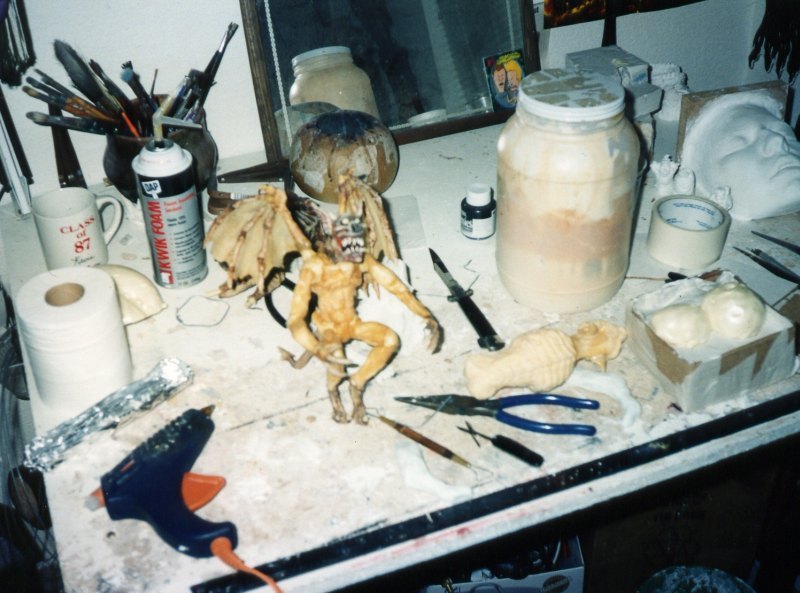 "This is a shot of the gargoyle being redone with a new body and better skeleton. He was the first model I made for the game and the initial skeleton didn't hold up that well. The more models I created, the more I learned about what works and what doesn't. So I went back and redid him. You can also see the newly cast body of the hell hound (without legs), lying next to him." 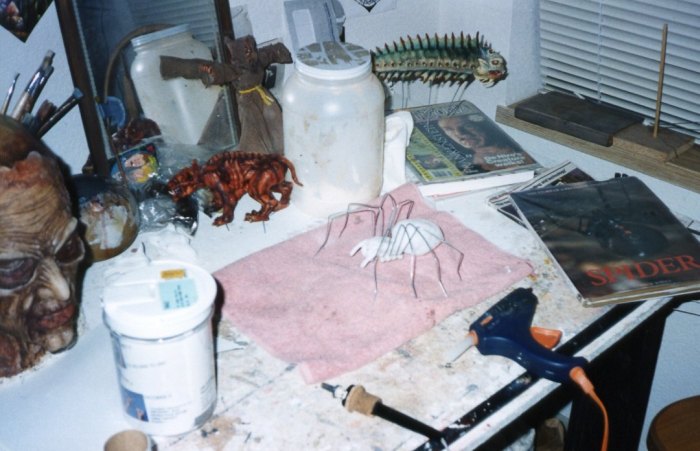 This is the skeleton of the spider model. It is made with Friendly Plastic. This shot also has the hell hound, the cultist, and the eel in the background. 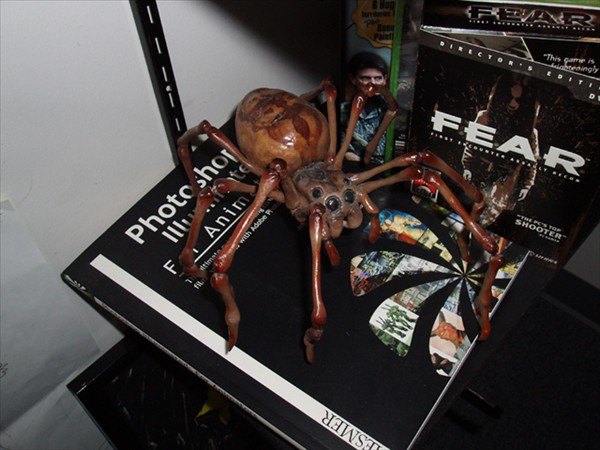 "The finished spider (which was super fun to animate)!" 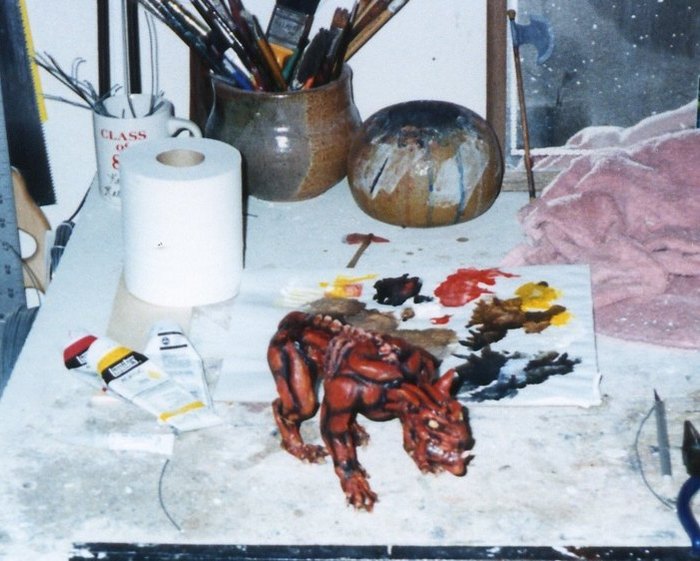 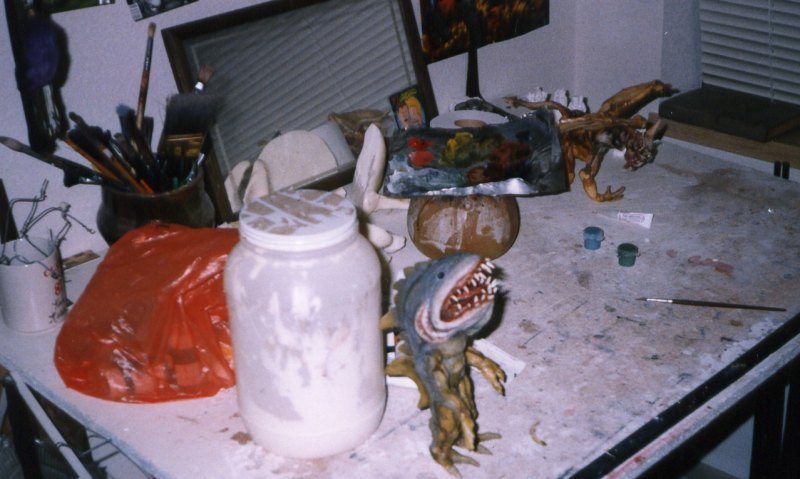 
"I was making monster masks and animatronic creatures at the same time that I was making the Blood models. I like looking at those old photos mostly for the stuff in the background." 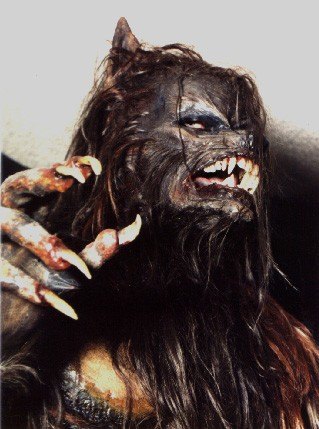 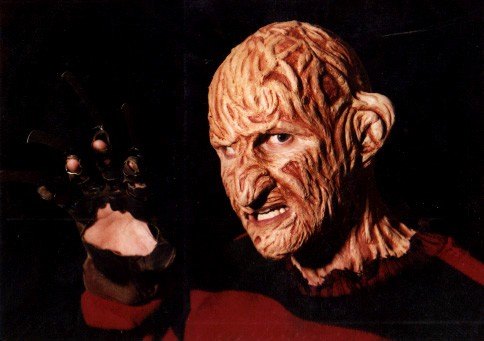 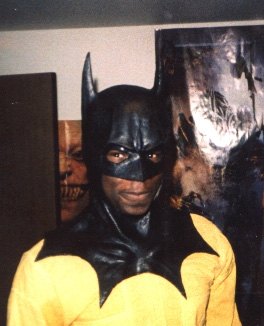 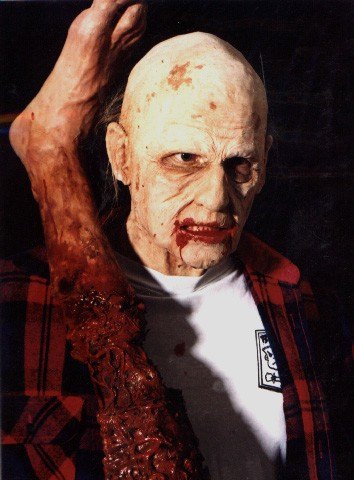 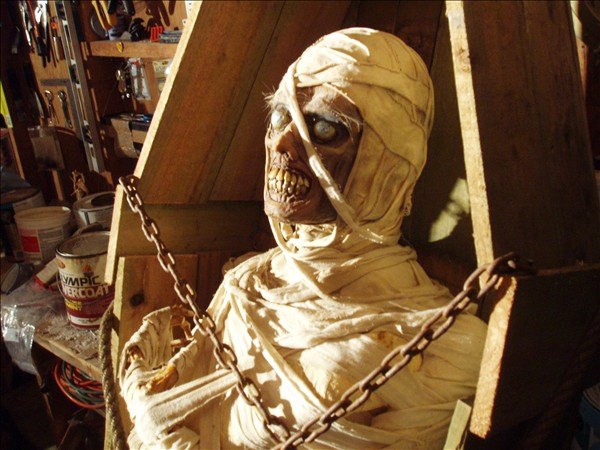 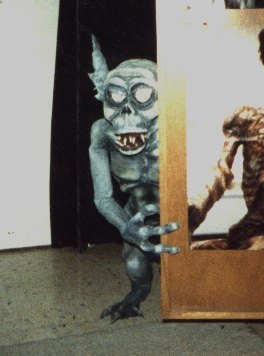 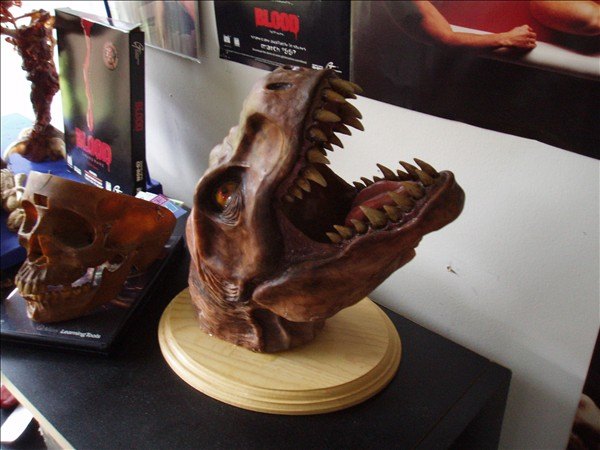 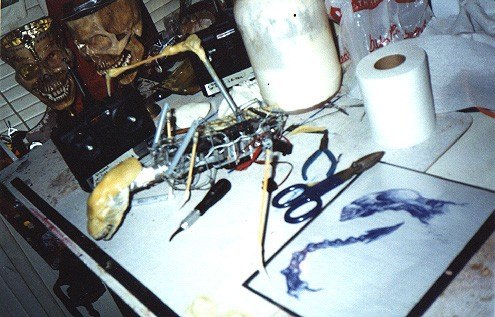 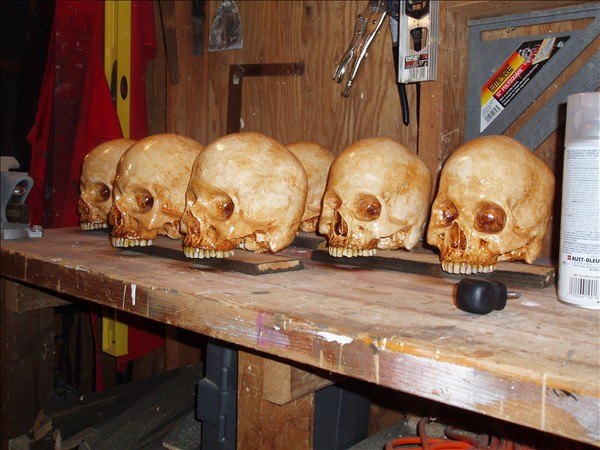 And that's that! A secret of the BLOOD Universe has been revealed. Don't be rapacious, if there is more to come then it's for the joy of all of us

It doesn't matter what kind of PC you have, if you can't play BLOOD on it...
Top

I have promptly stickied this.

Excuse me while I gather myself; I need to roll around on the floor and experience Bloodgasms right now.

Hurray! For me, Bloodgasms is guaranteed every time I visit Posty

It doesn't matter what kind of PC you have, if you can't play BLOOD on it...
Top

Final Caleb, I wonder if they left some behind the scenes footage during the development of Blood?

Did Kevin also made models of Ophelia and the other Chosen or he never did? I think it would be fascinating to hear to what Ophelia and the Chosen were originally meant to look like....
Top

It's amazing how many secrets have been revealed in this post.

I think a section for this on the Posty site would be fitting.
Top

It's simply amazing to see the models and the history in such detail.

I feel as giddy as a young boy on Christmas morning.

This thread is as epic and impressive as the man's collection of skulls.

That is some seriously heavy shit right there!
Top


Many many thanks to you for giving us all these pictures !
"I'm here to donate some blood...someone else's..." - Caleb

This stuff is seriously awesome.

. Thanks for the post, a great contribution.
Cabal's Return Add-On. Wait for it.